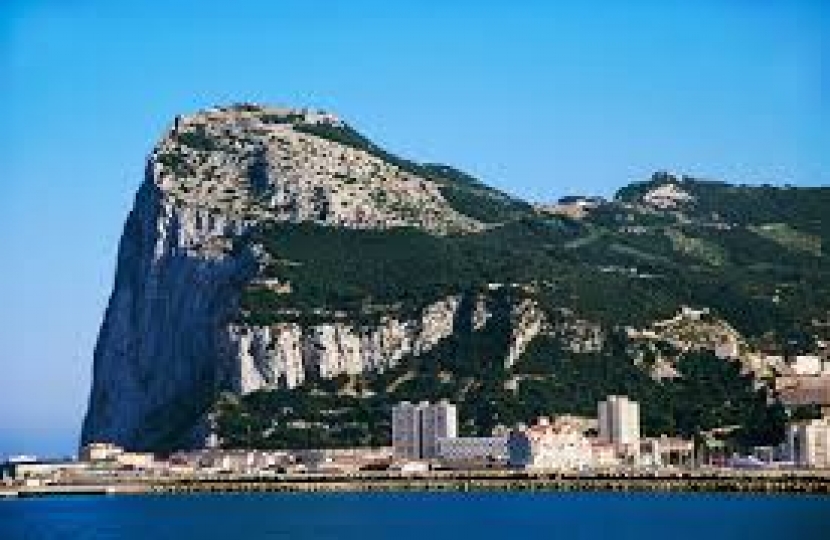 In recent months, a Spanish police boat opened fire on a jet skier in British waters, patrol boats launched incursions into British waters and military jets 'buzzed' the Rock. Spanish fishermen also recently attempted to disrupt efforts to create  an artificial reef in the Bay of Gibraltar. The latest moves to disrupt traffic  flow through the border reneges on the 2006 Cordoba tripartite agreement that agreed a relaxation of border checks.

Earlier this week I visited Gibraltar in order to gain a better understanding of  the situation and how it is actually affecting local citizens and services, rather than just relying on media reports.

I wanted to provide you with background information about the reef, which is causing difficulties and also update you on the current border situation.  During the visit, I was fortunate enough to meet with:

Roy Stanbrook, CEO and Captain of the Port

The Department of the Environment (DoE) of HM Government of Gibraltar (HMGOG), as part of its obligations to enhance the natural environment of the region, including those  under  EU  environmental  legislation,  has  been  surveying  Gibraltar's marine  and  coastal habitats for eight years.  During this time, the Department has been concerned about the continuing over-exploitation of marine resources and damage caused to various aspects of the marine environment.  In addition to various on-going legislative measures, the Department of the Environment presented HMGOG  with a proposed scheme to create an artificial reef within British Gibraltar Territorial Waters (BGTW).

These measures will result in increased fish stocks which will in turn improve populations of threatened piscovorous species such as blue-fin tuna and Mediterranean Shags,  and support artisanal fishing in surrounding areas.  Re-establishment of mollusc populations will mean the areas serve as nurseries to re-stock surrounding substrates in both British and Spanish waters.

The area of the site in which the 70 artificial reef modules were deployed is approximately 220,000m squared (0.2km squared) representing about 0.2% of the total area of the Bay of Gibraltar. The material chosen for the reef modules is inert materials, in other words materials that do not cause pollution through leaching, physical or chemical weathering and/or biological activity. The material is exactly the same  as that used by the Spanish Government along the entire Mediterranean coastline

The artificial reef modules were submerged and placed within an area which:

- Is not a shipping lane;

- Is not a military exclusion zone;

- Is not a recreational zone;

- Has no engineering use of the seafloor.

I flew into Gibraltar Airport on Sunday morning. On previous visits I have flown  into Malaga and used the border crossing however, on this occasion owing to the  recent difficulties I have experienced with internet trolls and time limitations, I opted to fly straight into and out of Gibraltar Airport.

As you will be aware, the border crossing for vehicles and pedestrians has been,  and continues to be, an extremely sensitive area. In my meeting with the Gibraltar Police Commissioner and some of his team I was able to hear the difficulties they are having at the crossing and how this is placing a strain on their relationship with their Spanish colleagues. I heard about the logistical difficulties of the border restrictions imposed by Spain and how many hundreds of vehicles can be affected, often having to spend hours in 'holding bays' - which can be hard to manage in the heat.

The President of the European Commission, José Manuel Barroso, and the Spanish Prime Minister Mariano Rajoy, have discussed the Gibraltar issue. They agreed that a Commission fact finding mission should examine the border control and movement of people and goods issues as soon as possible. Whilst they are not expected to be deployed until next month, citizens are entitled to expect the Commission to ensure that European citizens are able to enjoy their rights to free movement wherever they live.

EU observers will try and ease tensions between the two countries over extra checks which have led to the lengthy traffic delays. Britain says the checks break EU free movement rules, but Spain says Gibraltar is not controlling smuggling adequately.

President Barroso expressed his hope that Spain and the UK would address these matters in a way that is in line with their common membership in the EU.

The Spanish authorities say they are carrying out legitimate border control measures to combat smuggling and it is true that Gibraltar is not part of the European Customs Union so is not, in that sense exactly the same as the UK. In my opinion, the border checks are over the top, politically motivated and do not support intelligence based policing for smuggling operations. This also applies to the restrictions on free  movement of people. As the UK is not part of the Schengen Area proportionate checks on identity are allowed. This is no different to the checks that we're all familiar with at UK airports and ports and accept as the price we pay to protect our borders from illegal immigration. The periodic draconian tightening of checks by the Spanish authorities goes way beyond "proportionate" and cannot be justified.

It has been confirmed that any tax at the Spanish border with Gibraltar would be  illegal. Following on from the discussions between Barosso and Rajoy a delegation of observers will be sent from the Commission to the border to assess the situation and establish if rules on free movement are being broken. The difficulty here of  course is the timing - if the Spanish know when the Commission are visiting it is likely there will be no queues or issues. The UK Government continues to consider legal action against Spain which would be unprecedented. Spanish fishermen continue to claim that the artificial reef is affecting many livelihoods, a completely risible claim as anyone who visits the site will confirm.

Gibraltarians will not be intimidated by Spain, whose troubled government seems to be launching these aggressive actions in a desperate attempt to distract from  its domestic problem. Be assured, I will continue to support my constituents across Gibraltar.